Food Processing is a water-intensive process, and its wastewater byproduct is typically high in volumetric daily flow and also biochemical and chemical oxygen demand (BOD and COD), organics, and nutrients. Consequently, significant on-site treatment and resources are necessary. Wastewater from food processing plants is commonly treated with biological treatment using a two-stage anoxic and aeration process. The plant’s process water is first sent to the anoxic tank for denitrification via nitrate recycle, then followed by a nitrification process in the aeration tank.

Robust mixing and aeration technologies for these tanks are vital to the treatment process and outcomes. If the selected aeration system is incapable of treating the entire depth of the tank, odor compounds such as hydrogen sulfide and methane can form while also resulting in violations of regulatory permits.

Jet aeration is among the most efficient biological treatment methods used by poultry & meat processors, as well as other food & beverage manufacturers globally. 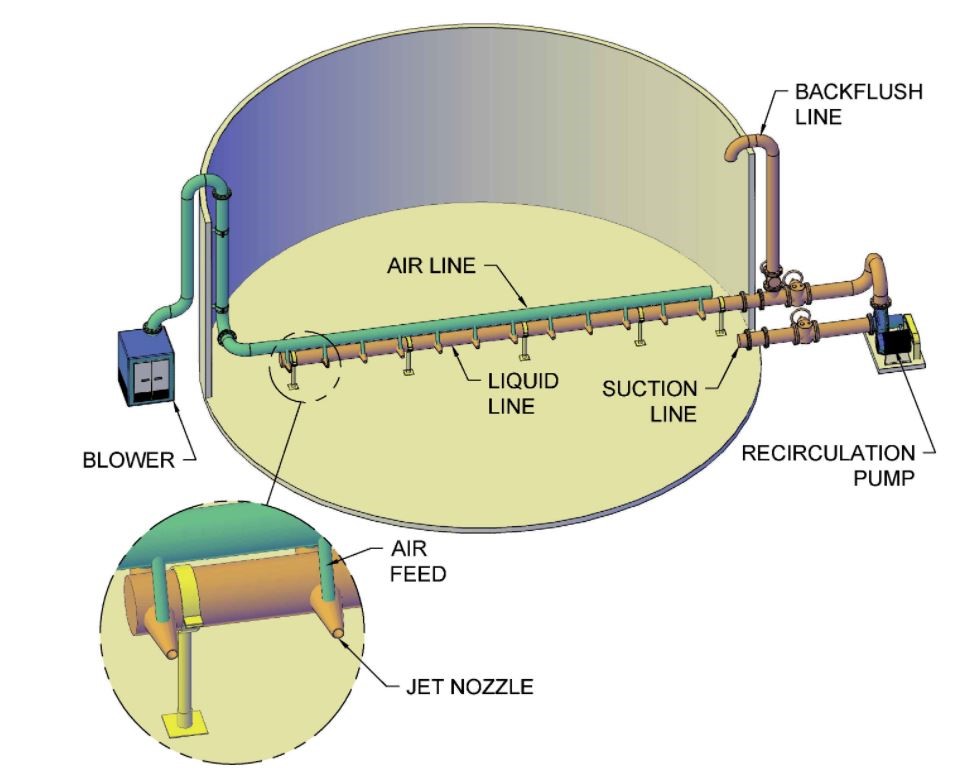 Fundamentals of Operation: Based on the operating principles of ejectors, wastewater from a recirculation pump and air from an air blower travel down independent lines in the in-tank aerator and meet within double concentric jet nozzles, creating intense liquid-air contacting and mixing of these two streams while forming micron-size bubbles. The mixed flow shoots out of the nozzles at high velocities in strategically designed mixing patterns that allow for continuous movement without any “dead zones” inside the tank.

Some of the key system benefits are summarized below:

Process Flexibility: With jet aeration systems, both mixing and oxygen transfer can be independently controlled. Mixing is handled by the recirculation pump while the level of oxygen transfer is managed by the air blower. This added flexibility is especially useful if one tank is out of service, a second tank can still be used to treat the BOD load. The other advantage is that the nitrate recycles between the aeration and anoxic tank is done using the same pumps that are used to provide motive liquid to the jet aeration system located in the anoxic tank. This eliminates the need for a separate nitrate recycle pump.

Maintenance-friendly: All mechanical and rotating equipment components of jet systems are situated outside the tank for easy operation and maintenance. In-tank jet aerators are designed and manufactured with durable and abrasion-resistant materials such as fiberglass reinforced plastic (FRP) or stainless steel. Jet aeration systems are designed for a 20-year life so there is little need to drain the tank for routine maintenance. Adding a pneumatic backflush system can virtually eliminate all in-basin maintenance or manual cleaning while maintaining high levels of oxygen transfer and mixing.

Performance in Cold Climates: Diffused aeration technologies like jet systems sit at the base of tanks and basins and are ideal for freezing climates; they can operate effectively throughout the year, including during harsh winters when surface-based aerators may freeze, malfunction, or otherwise need to be removed from service.